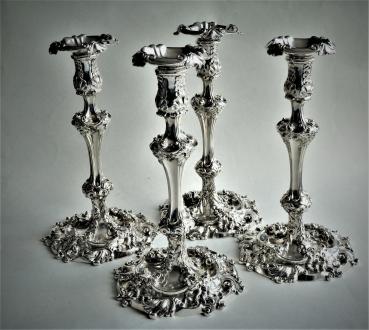 All in the rococo revival style and each on a shaped circular base chased with four wonderful bearded masks separated by partly matted leafy scrolls and with further scrolls beneath. All around four plain sunken wells, one engraved with a crest, divided by trailing strands of flowers terminating above the head of each mask. The baluster colums with two knops, the lower and smaller one chased with eight recumbent "c" scrolls capped by four shells. The elegant stem formed as four wide flutes rising to the larger upper knop chased with further masks separated by upturned recumbent "c" scrolls. The sconces chased with four upright chased panels of overlapping shells. The detachable nozzles embossed with double scrolls rising to matted rocaille shells and separated by further large "c" scrolls.

George Watson Taylor commissioned from Rundell, Bridge and Rundell in 1815

Probably acquired by the Holdiche family.

The style of these candlesticks is pure 18th century and Christopher Hartop, in a further exhibition catalogue for Koopman Rare Art entitled "Art in Industry" p.83, suggests that these were cast from 18th century originals. This is highly plausible as Storr is known to have copied some wonderful candelabra made for the Duke of Leeds in 1816-17 that were cast either from originals by Thomas Germain in 1727-28 or another copied pair by John Hugh Le Sage, 1744-5.

In 1810 George Watson married Anna Susanna Taylor, daughter of Sir John Taylor, 1st Baronet. On June 19th 1815 he was granted the additional surname of Taylor by royal licence following the death of Anna's uncle Sir Simon Taylor. At this time Anna inherited a vast fortune which probably explains the acquisition of 18 candlesticks from Rundell, Bridge and Rundell in the same year. According to the Christies 1832 catalogue over 18,000 oz of silver were purchased from Rundell's, the title page saying" The whole of which was executed by Messrs. Rundell & Bridge, from the most elegant and costly designs, prepared expressly for this service". Similarly, the candlesticks which appeared in pairs as lots 42-45 and 71-75, were described as "of rich old pattern, beautifully chased with masks and foliage in the the boldest taste". The buyers are recorded as "Hyams, Halladay, Burden, Walters and Emanuel". The firm of Emanuel Brothers is well known for being retailers of silver and jewellery so if this set of four were to pass to the Holdiche family it is most likely to have been via this route.

Traces of the origial Watson Taylor crest are just visible on some of the nozzles but on the change of ownership, presumably soon after the auction, the old crests were erased and new ones added. The current crest of an arm in armour, embowed, holding a scimitar is that of Holdiche but no information has come to light to enable identification of which branch or individual. By 1832 Watson Taylor was heavily in debt having earlier embarked on a lavish spending spree and so was forced to sell up most of his treasures. He died on June 6th 1841 in Edinburgh.

The original candlesticks from which these may have been cast have not been identified but one is tempted to suggest Paul De Lamerie as a possible influence. Lamerie's use of masks was probably unsurpassed during the first half of the 18th century. Apart from the emerging lion, which seems to have been a favourite, he used a number of closely related bearded masks that can be seen on such pieces as the Maynard Charger,  the feet on a basket of 1741 now in the Cahn Collection, the Folger coffee pot and on the feet of another basket of 1742 now in the Gans Collection, Richmond, Virginia.

These candlesticks are in superb condition and display a considerable degree of virtuosity.