A Selection of Silver by Omar Ramsden 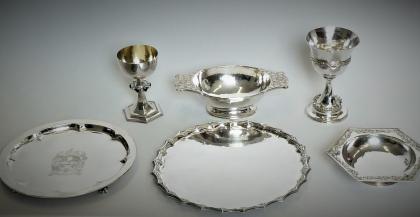 The silver of Omar Ramsden is immediately identifiable largely because of its historicist influences and his adherence to the Arts and Crafts ethos. These coupled with his insistence on high standards of workmanship throughout a working life of 40 years make his work very popular amongst collectors. Few if any other silversmiths of the first half of the 20th century remained at the forefront of their craft for so long. As a result there are always pieces appearing on the market but many have not always survived the rigours of over zealous cleaning or remained in their original state. Ramsden was a self publicist as evidenced by the vast majority of his output engraved "Omar Ramsden Me Fecit" but also many of his special commissions were inscribed or chased with "I was wrought for....". Generally speaking such personal dedications are not popular in the world of silver and never have been unless the donor, recipient or occasion was of sigificant historical interest. Consequently there are pieces out there that have been erased and re-hammered. This is nothing new but the planished or hammered surface that is the trademark of Ramsden's output is so important when considering a potential purchase. All of the items depicted in the image are in superb condition and all come from a private collection.