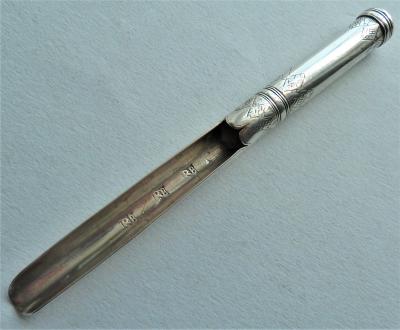 The handle of tubular form, the slightly bulbous end with fluted lines and with another band of two lines nearer the centre, enclosing scratch engraved lozenges at the end and either side of the ringed lines. The scoop struck with the maker's mark 3 times.

17th century apple corers are not only rare but rather endearing objects. There is a simplicity, even elegance about them that has attracted collectors over many decades. By the second half of the 18th century they were made in large numbers and the construction changed from being one piece to having a detachable scoop that when reversed screwed back into the handle.

The maker R.B has not been identified but is well known for small silver at the end of the 17th century. A very similar scoop by the same maker is illustrated in Eric Delieb, Investing in Silver, p.145 also a number of early punch strainers have been noted by the same maker.