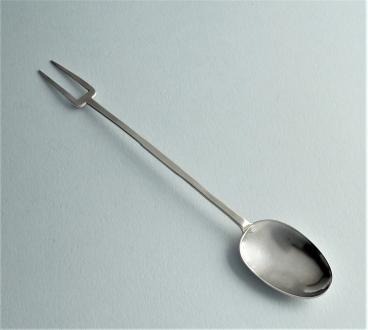 Of plain design, the oval bowl with ribbed rat-tail and the stem with slightly widened centre terminating in two flat and tapering tines.

The use of Sucket forks goes back many centuries with Saxon examples in evidence and others from Tudor times. Surviving silver forks/spoons, however, seem to only date from the second half of the 17th century onwards. The word Sucket is derived from the French "Succade" which means candied fruits or a fruit preserved in sugar syrup. More specifically it was used for the peel of a citron which is similar to a lemon with less juice but with a more valued skin.

It seems that most Charles II sucket forks/spoons had stems of rectangular section, often with broadened centres presumably for ease of handling and possibly to make them a more interesting and stronger design. They are far less common than trefid spoons and fully marked examples are rare.

This piece bears the maker's mark of John King. Although it is a little rubbed the "K" and the rosette below are identifiable and of course King was a well known spoon maker.