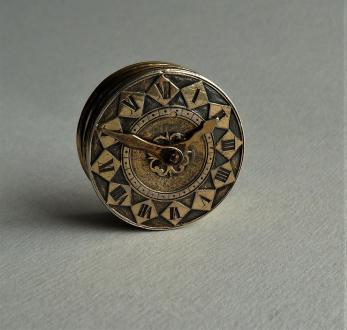 Of circular shape, the pull off lid modelled as a clock face with twelve Roman numerals engraved on plain lozenges and on a matted ground. The centre with two clock hands above a tudor rose surrounded by further matting and a narrow band of oblongs enclosing pellets.

This charming and rare box is modelled on a clock face from the last quarter of the 17th century. Although the precise purpose may be uncertain it is most likely to be for gaming. Counter boxes first appeared in the reign of Queen Elizabeth I and remained popular until the mid-19th century. This one is particularly refined and has been part of two famous and distinguished collections.

Eric Delieb, in his ground-breaking book “Investing in Silver” (published in 1967) illustrates a much later but similar “Gaming Box” by Joseph Taylor of Birmingham, dated 1797. The Tudor Rose on the present box, visible beneath the clock hands, gives a strong clue as to the date of the box, this device being very popular towards the end of the 17th century.