PART OF OUR EXTENSIVE COLLECTION OF DRINKING VESSELS 1580-1827 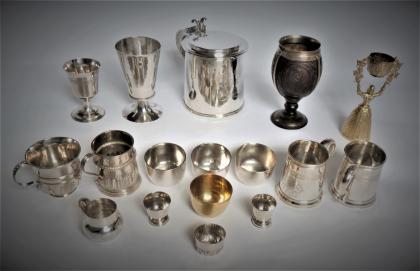 For many years we have specialized in drink related silver and are currently particularly strong in 17th century items.  In the back row the mounted coconut cup is a great rarity superbly carved with an extensive scene depicting the execution of Sir Thomas Wentworth, 1st Earl of Strafford in 1641. The Charles II Wine cup of 1671 is in superb condition and of a form rarely seen. The tankard, also dated 1671, similarly has a beautiful colour and patination and bears the arms of a prominent Exeter family who have incorporated the city's armorials (and hallmark) into their own armorials (SOLD). To the left is a charming Elizabeth I small sized communion cup of about 1580 and to the right a very rare George IV silver-gilt wager cup commissioned by The Worshipful Company of Vintners in 1827. The Scottish Thistle cup is one of the best we have ever had and was made by James Seatoune of Edinburgh in 1694. To the right is a very rare provincial mug by John Murch of Plymouth, circa 1695. The four tumbler cups are all 17th century, two from London, one from Warminster by Thomas Cory and the other by Robert Williamson of York. The small bulbous mug is a rare chinoiserie piece by H.T and dated 1685. The two tot cups are dated 1710 and 1718, the pair of mugs are by Joseph Ward  made in 1707 and the small dram cup is by Philip Hull dated 1691.