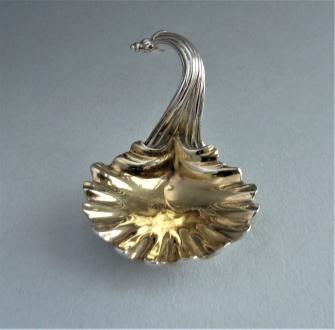 The scalloped bowl gilded on the upper surface and with a rococo style naturalistic handle formed as two reeded branches conjoining into one terminating in a whelk shell. The underside with ribbed back to the stem descending to the bowl in the form of a large leaf.

The earliest caddy spoons appeared around the mid 1770's and were generally cut from sheet silver. It wasn't till the early 19th century amidst the predilection for larger and more imposing cast objects that caddy spoons were fashioned in more dynamic forms. The most celebrated of all silversmiths at this time was Paul Storr although it should be said there were a number of other highly talented silversmiths working at the time. Storr was the first to produce this form of Caddy Spoon and it shows a subtle use of rococo themes that together produce one of the most delightful caddy spoons ever made.

One of the earliest examples by Storr was illustrated by Payne and Son of Oxford in their 1996 catalogue and dated 1827. A pair, also by Storr, are illustrated in  John Norrie, Caddy Spoons An Illustrated Guide, Plate V dated 1831. Another example by John Hunt, who was related to Storr by marriage, is illustrated in Robin Butler, The Albert Collection pp 248-9 and plates (2) 433, dated 1851. A variation on this type of spoon appeared in the Asprey catalogue "Small Collectible Silver and Gold" published in 1990, page 11, no. 33. Essentially the same design but with an extended scroll attached to the end of the handle.

The partnership between Charles Reily and George Storer was formed in 1829 and went on to produce a large quantity of high quality silver. The firm descended from Sandylands Drinkwater renowned specialist maker of wine labels and rattles in the mid-18th century and prime Warden of the Goldsmiths' Company.

This spoon is in excellent condition, with good marks and lovely coloured lemon gilding.