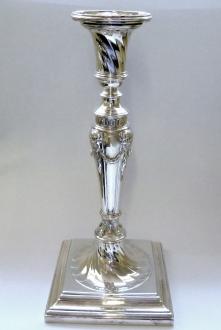 The square base with moulded and stepped edges supporting a baluster column rising from a spirally fluted dome to 4 rams hooves, the central section tapering with 8 chased vertical lines up to 4 satyr masks linked by festoons. The sconce also spirally fluted and the nozzle plain with ribbed border

The earliest surviving tapersticks would appear to date from the late 17th century and by the end of Queen Anne's reign they had substantially risen in popularity. Bureau bookcases at this time often had small sliding panels designed for supporting tapersticks as their purpose was for melting sealing wax before applying one's personal seal to the back of a letter or document. Tapersticks reached their peak towards the mid-18th century during the full flourish of the rococo period. Originally they followed the patterns of candlesticks but forms such as the Harlequin were produced without a counterpart in the larger size. The influence of Robert Adam and the Neoclassical style was substantial, not only in the Arts but in Architecture and interior fixtures and fittings and this Scofield piece is very much in that genre. Swags, paterae, rams heads and feet, fauns, satyrs were widely used particularly by the best makers of the period like Scofield, Boulton and Fothergill, John Carter, Andrew Fogelberg, Wakelin and Taylor and others.

Scofield was probably the most prolific maker of high quality candlesticks and candelabra during the neoclassical period but he seems to have made very few tapersticks. This example illustrates his talent for balance, proportion and elegance.