A Fine Charles I Medallion 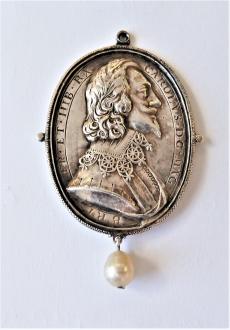 The portrait bust is of Charles I facing to the right, his hair falling over a high lace collar and inscribed around the edge with "CAROLUS. DG. MAG. BRI. FR. ET. HIB. RX" (Charles, by the grace of God, King of Great Britain, France and Ireland.") and within a narrow threaded and zig-zag engraved border. The top with suspension ring and the bottom with attached pearl. The reverse with engraved Royal Arms beneath a crown and the Garter motto "Honi Soit Qui Mal Y Pense" (Shame to him that thinks evil)

This badge is distinguished by its superb condition and is one of the best we have ever had of its type. Such pieces were given to Royalist supporters who would have worn them on a chain around the neck, similarly the pearl, which is later in date, represents loyalty.

There have been a number of these badges that have appeared over the last two decades but very few have remained in such superb condition as this one. They were designed by Thomas Rawlings who worked under Nicholas Briot at the Royal Mint. He was appointed Chief Engraver of the Mint in March 1647.