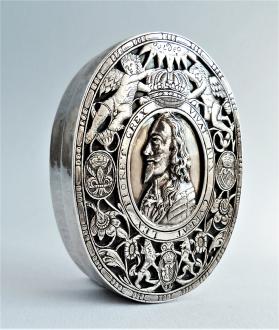 Of oval shape with pull off cover. The base entirely plain and the cover with a pierced and engraved sleeve surrounding a portrait bust of Charles I facing to the left and clad in armour. The border engraved with groups of 3 beads separated by plain panels enclosing an elaborate band of pierced and engraved flowers, leaves and scrolls and the top engraved with partial outline of the sun engraved "Video" flanked by 2 putti holding a crown. Either side of the bust are oval medallions with a fleur de lis for France to the left and a harp for Ireland to the right whilst the bottom has another of a crowned rose and thistle for England and Scotland between lion and unicorn supporters. The bust also surrounded by the motto "Vivat Rex  Currat Lex  Floret Grex"

A few of these boxes have appeared at auction over the years, the most impressive of which is a gold example now in the Gilbert Collection at the Victoria and Albert Museum, sold by Christie's, December 12, 1983, Lot 23. Three other silver ones are known:

The last of these bore the maker's mark B.B for Benjamin Braford who was working in London after the restoration giving an indication that such boxes were made as commemorative pieces rather than during the reign of Charles I. Both Charles Truman in " The Gilbert Collection of Gold Boxes" and Timothy Schroder in "The Gilbert Collection of Gold and Silver" proffer the same conclusion that these boxes are post Commonwealth and not just on the basis of the marked box but also the iconography. However, Robin Butler, in The Albert Collection, p.8, no.106, produces interesting evidence that such boxes were made before the execution of Charles I. Butler cites from a letter of Thomas Knyvett dated January 17th, 1640 asking his wife..."desier him to to send me by his bearer towe of Hillingsworths Tobaccoe boxes with the King's picture in silver & and a stopper. Thay cost 4s 6d a peece."  Butler also states " Richard Illingsworth was said to have been working in Westminster in 1641". Furthermore, he goes on to assert that "a crown over each (national) emblem and the King was used in Europe and in Britain, but is not seen after the reign of Charles I. However, the sunburst over the King may refer to his execution (on January 1st 1649) which would date the box after 1649."

The motto translates as " The King lives, the law guides and the flock flourishes" which Truman rightly states was more in keeping with the sentiments of the time. Charles II went to great lengths to herald the re-establishment of the monarchy particularly with the introduction of a vast number of large civic maces. The exact dating of the box, therefore, is problematic but could have been made at any time between 1640 and 1675.

This box is in superb condition and a wonderful statement of the politics of the period.