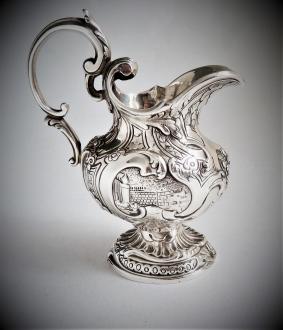 The oval baluster body upon an oval pedestal foot chased in the high rococo style with fluted shellwork above a band of circles. The bellied sides with shaped oval cartouches depicting buildings all surrounded by straps, scrolls, further shells and crustacean motifs and the front with a bouquet of flowers. The double scroll handle applied at the top  to two overlapping shells.

For collectors of cream jugs this is an unmarked example of very good quality. The imposition of a duty of sixpence per ounce in 1720 on all hallmarked silver had a twofold effect: It led to a sudden output of "Duty Dodgers" whereby marks from an old or damaged piece were cut out and soldered into a newly made piece. Secondly, it was not against the law to leave a piece unmarked which is why so many mid-18th century cream jugs were absent of marks in order to avoid the punitive tax.

Michael Clayton, in his superb Dictionary of the Silver and Gold of Great Britain and North America, illustrates a similar cream jug by John Eckfourd, See page 83, plate 157a. which may give a clue to the identity of the maker of this jug.